On 26 September 2015, Chairman Richard Gaunt welcomed 23 Friends to a fascinating presentation by Howard Parker of the Thomas Forman Preservation Society. Other members of the Society were in attendance and Val Astill gave a short presentation on her reminiscences of working for Thomas Forman.

Thomas Forman came to Nottingham in 1848 and acquired a printing works on Long Row from a printer named Oliver. Newspaper and book production were the major part of the business. The first issue of the ‘Daily Guardian’ appeared in 1861 followed by the ‘Evening Post’ in 1878. His four sons all eventually became partners in the business and the name ‘Thomas Forman & Sons’ was assumed.

In 1870, the business moved to Sherwood Street with a frontage on what is now Forman Street. Due to the expanding business, the partnership was dissolved in 1919 and the general printing side of the business, headed by James Forman and his son Dudley P. Forman, moved to new premises on Hucknall Road in 1926. The building was the first purpose built printing factory in the country and the original façade still remains today. 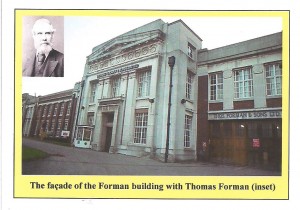 Following the deaths of James and Dudley Forman, the business remained in the ownership of the family until it was sold to Mardon Sons & Hall in 1960. In 1984. they sold out to Robert Maxwell’s British Printing & Communications Corporation. In 1989, it was sold again to a London Group of Managers and finally closed in 2000.

During its existence, the Company produced a wide range of products such as brochures, showcards, labels, cartons and security print. Forman calendars were renowned all over the world. Work was produced for many well-known companies including Cunard Steamship Company, British Airways, John Player, Rowntrees and many more household names.

Forman’s had their own artists and reproduction departments and printed work by letterpress, litho and gravure processes together with all the finishing operations.

At its peak, the company employed over 1,000 people which included a large sales force with offices in London and Liverpool.

The demolition of the factory commenced in 2001 and, in the autumn of that year, a Time Capsule was excavated containing many examples of work the company produced during the 1960’s. The contents of the capsule are held by Nottinghamshire Archives.

Following this event ‘Thos Forman Preservation Society’ was formed and the Society currently has 120 members and holds an annual reunion attended by former employees and their partners. The Society publishes a newssheet ‘Inform Two’ and ‘Historical Bulletin’ in January each year. One of the objectives of the Society is to obtain memorabilia and archive material of the former company, much of which has been deposited with the Nottinghamshire Archives.

The left hand side of the frontage was acquired by the Indian Community Centre Association (ICCA) in 2003. Since this part of the building closed in 1998, it had fallen into disrepair and become a target for vandals. The ICCA have done a wonderful job in refurbishing the building and restoring it to its former glory. 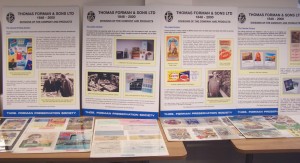 The Nottingham Civic Society has promoted the erection of a number of plaques on historic buildings in the city and the plaque unveiled in January this year will serve as a lasting reminder to the public and historians, what the façade of this building originally represented.

Our thanks to Howard, Val and the Thomas Forman Preservation Society for their presentation and for providing this article.

Visit us on UTube

We use cookies on our website to give you the most relevant experience by remembering your preferences and repeat visits. By clicking “Accept”, you consent to the use of ALL the cookies.
Cookie settingsACCEPT
Manage consent

This website uses cookies to improve your experience while you navigate through the website. Out of these, the cookies that are categorized as necessary are stored on your browser as they are essential for the working of basic functionalities of the website. We also use third-party cookies that help us analyze and understand how you use this website. These cookies will be stored in your browser only with your consent. You also have the option to opt-out of these cookies. But opting out of some of these cookies may affect your browsing experience.
Necessary Always Enabled
Necessary cookies are absolutely essential for the website to function properly. These cookies ensure basic functionalities and security features of the website, anonymously.
Functional
Functional cookies help to perform certain functionalities like sharing the content of the website on social media platforms, collect feedbacks, and other third-party features.
Performance
Performance cookies are used to understand and analyze the key performance indexes of the website which helps in delivering a better user experience for the visitors.
Analytics
Analytical cookies are used to understand how visitors interact with the website. These cookies help provide information on metrics the number of visitors, bounce rate, traffic source, etc.
Advertisement
Advertisement cookies are used to provide visitors with relevant ads and marketing campaigns. These cookies track visitors across websites and collect information to provide customized ads.
Others
Other uncategorized cookies are those that are being analyzed and have not been classified into a category as yet.
SAVE & ACCEPT